Erin (エリン, Erin) is character introduced in Plunderer. She is the secretary of the Althea Royal Guard, which works under Alexandrov Grigorovich and Jail Murdoch's order.

Erin has long hair that is tied in braid. She wears glasses and dresses professionally.

Erin is a childhood friend of Robert Du Vanvich, her parents has been killed by the Ballot Holder. This also included Robert's father as well, who's the soldier of the Althea Royal Guard and failed to protect them. During the funeral. Alexandrov Grigorovich attended the funeral and asks Robert and Erin about what they want to do. Erin stated that she wants revenge for her parents and become soldier. With this, Alexandrov ordered Avsette Vremya to bring Erin to the army.

As she grew older and became a soldier, Erin no longer thought about revenge anymore, as she's satisfied at her job as secretary and fallen in-love with Alexandrov.

Erin first appeared in Chapter 31, as she left the commander's room, she meet Jail Murdoch who wanted to see Alexandrov. Erin suggested Jail to wait until sometimes later on if he want to see Alexandrov, as he just now found the time for him to rest, although Jail doesn't listen and kicked the door instead.

Later, after a coup d'etat where Alexandrov was accused of murdering Charles De Bergt Althea The 11th and two of the Grand Generals, Erin is still staying on the Royal Guard's main base under the command of Robert, until she betrayed him and joining side with Sakai Tokikaze and the Abyss, in order to take Alexandrov's Supreme Commander position back from Robert.

When the Abyss started their invasion on Althea, Erin is seen to be working together with Tokikaze and helping the Abyss children to fill their stomach. During a night, Erin informed Tokikaze that the children missed him so much and they wanted to see him return, but Tokikaze stated he need to finish his job on murdering all of Special Service's high ranked soldiers first before returning. Soon, the Althing was show up so he informed Erin to uses her communication ability, only to discovered that Licht Bach is in charge with the Althing

After Gespenst Zerlegen revealed to be the seventh Baron, Erin and the children was captured by the White Special Service and they told Erin to stop recording to situation to Tokikaze, as they don't want any people know how Gespenst's ability works. Later on, Erin reactivate her communication ability to have a contact with Tokikaze under the White Special Service's command, which shown Nikola and Schmelman Bach on the screen. After Schmelman ordered his henchman to kill all the Abyss children, Erin immediately closed her communication as she find their actions disgusting and unforgivable, which annoyed them and decided a children in front of her. Soon, Erin and the children were saved by Jail. Erin informed Jail that there's a lot more children is still being captured by the Special Service, Jail only told Erin to uses her ability so he could order the Gefängnis to save other children. After the Gefängnis saved all children, Erin informed Jail that Gespenst is the seventh Baron and part of the Special Service. Soon, Jail smiled and stated that Gespenst has finally showed his "true" color, in which confused Erin at his facial expression.

After Licht has successfully regained his original Ballot Replica, Jail told Erin to use her ability to contact with Licht and the others, informing them that they already saved the Abyss children. During the conversation, Jail stated there's something seriously wrong happened to Tokikaze earlier, which Erin explained no matter how she tried to contact him she can't reach his mind, this makes Licht realized that Tokikaze has been brainwashed by the Special Service.

After Jail finished his conversation with Licht and started his move against Robert, Erin begin to find Alexandrov's whereabouts. Later when Jail is almost defeated by Robert, along with Alexandrov, they saved Jail and took Charles' corpse. After Alexandrov gave his Ballot to Jail, he ordered Erin to uses her ability to let everyone watch the fight between Jail and Robert. Later after Jail defeated Robert and he revealed his conviction, both Alexandrov and Erin were surprised at Robert's conviction of become like the wind.

Three months later, the final battle between Royal Guard and Special Service has finally begun. Along with Alexandrov, Erin is staying at somewhere at the mountain and watching the war. Erin informed Alexandrov that despite the superior numbers the army have, most of the Royal Guards were easily overwhelmed by the Special Service and they were only able to survive because of Avsette's strength, Alexandrov only said that the Royal Guards is really no match against them due to lack of Ballots to uses. Alexandrov also said the situation might be different if Robert also joined part in the war as well, Erin said she agreed with him and she tried to ask Robert about it before, but Robert stated he won't due to his injury and he believes the allies won't trust him. Soon, Erin informed Alexandrov about Jail fighting against the Special Service members all by himself, which caused Alexandrov being shocked.

Erin's count is yet to be reveal, her count stands for the number of times she connect with people important to her. 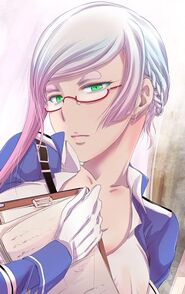 Retrieved from "https://plunderer.fandom.com/wiki/Erin?oldid=9088"
Community content is available under CC-BY-SA unless otherwise noted.