Firenda (フィレンダ, Firenda) is a character introduced in Plunderer. She is one of the instructors of the 13th Special Military Forces School.

Firenda has pink hair that is tied in a ponytail and blue eyes. She is wearing her military uniform.

Firenda first appeared in Chapter 13 in the past timeline, seen to be standing beside Alexandrov Grigorovich at the start of the enrollment ceremony. Later when Schmelman Bach almost killed Sakai Rihito, Firenda stopped it and revealed that it was all an act.

During the peeping incident, Firenda is shown to be guarding the outside of the woman's bath.

A few weeks later, at midnight, Firenda has a meeting with other instructors. During the meeting, Schmelman asks Firenda if she was able to reproduce the Ballots or not. She explains she can't but she can reproduce the unknown power coming from the Althing. Later, Schmelman asks other instructors the progress of the "Aerial Ace Project", Firenda stated that the surgery is successful but for unknown reason the rats becomes more brutal. Firenda stated she wanted to test the project on a human but Schmelman denied it. Soon, Schmelman gives that berserked rat a Ballot while caused it's strength increased rapidity. Schmelman then freezes the rat with his power and said it's amazing. While releasing his "evil" aura, he told Firenda keep her research and said they'll gives Class A students the surgery, once the "Aerial Ace Project" is completed.

Few months later, after Davi was killed by the terrorists, Firenda told Schmelman that it's time for them to excuse the "Aerial Ace Project", which shocks him and Alexandrov as the project is still incomplete. After heard Firenda's prediction that their projects might be leaked, Schmelman asks her who will be chosen for do surgery and she said Rihito is the perfect candidate for this project. This angered Schmelman and tried to freeze her, she then points out that the reason why the rat's brutality increased is due to Schmelman's bloodlust gene that he can't control himself. Firenda also stated that they must experiments on human now or she will abandoned the project and letting the students killed by the terrorists, which Schmelman have no choice but give Rihito do surgery and stopped his action on freezing Firenda.

In the next day, Firenda informs Class A students that she will give Rihito a surgery to gains superhuman strength, she also explains that if the surgery failed Rihito will die. This shocks the Class A students and asking Firenda why, and she explains they needed a "magician" to overcome the possible war may happen soon. Soon, the surgery was started. As Schmelman's genes successful injected into Rihito's body, the Abandonment War is started by the school took a surprise attack. After the surprise attack, Alexandrov informs Firenda what happened outside the factory. Firenda stated that she predicted that this and explains that the Abandonment War begin earlier because other nations used Althing to started the war without informing any Japan staffs. Then, Alexandrov shocked and wonder why is Firenda laughing but she said she didn't. Soon, after Alexandrov gave the phone to Jail Murdoch, Jail asks Firenda where is the exit but she stated the entrance has already blocked due to United Nations Force's attack earlier. She also stated that if this continue, Rihito will die from injecting too much Schmelman's genes. Firenda told Jail and the others that they must active the backup electrical in order to save Rihito.

After the war started, along with Tsukina Farrow was served as the scientists of the Special Service. Firenda and Tsukina keep finding a solution to solves the lack of resources, and they discovered the unusual feature all Barons have. Knowing all Barons can survive without eats and drinks, Firenda and Tsukina made a drugs that can transforms anyone into a Baron. It's noted that Firenda has secretly creating the clones of Class A students without Licht (Rihito) and the others noticed. On the last day of the war, after the Barons collected all seven original Ballots, the instructors uses Althing to approved the permanent banned of nuclear weapons and created a sky island named Althea. As Sakai Tokikaze steals one of original Ballot, Firenda releases Rihito to kill Tokikaze and take back the original Ballot.

After he successfully does so and returns to his normal consciousness, Ferinda personally travels down via flight harness in order to retrieve Licht after he successfully retrieves the Original Ballot, having gleefully forcibly dragged him back to Althea as he looked on in horror as the rest of Class A was abandoned in the newly dubbed "Abyss" as they looked at him in shocked horror and fear of his bloodthirsty actions.

Firenda's fate remains unknown after the end of Abandonment War.

Not much known about Firenda's fighting skills. However, Firenda was known to have been one of the most advanced scientist in the entire world prior to the Abandonment War. 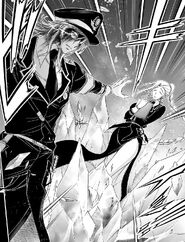 Firenda's character design
Add a photo to this gallery

Retrieved from "https://plunderer.fandom.com/wiki/Firenda?oldid=6549"
Community content is available under CC-BY-SA unless otherwise noted.