Freidkam is a middle age man wearing his military uniform.

Freidkam first appeared at the end of Chapter 37, along with other two grand generals and Alexandrov Grigorovich having a meeting with Charles De Bergt Althea The 11th, the King of Althea, in the castle. During the meeting, Charles wants to ask the grand general's thought about giving three Ballots to Special Service. Freidkam stated that he supports Charles' choice, as Althing's support on makes Althea floating is slowly disappearing due to one of the Ballots was lost in 5 years ago, especially with the "Abyss Demon" incident that happened in Linden few months ago. Although Robert Du Vanvich is opposed at this idea, as he believes Special Service should have brought their Ballots to the Althea Royal Guard instead. As Robert said he wanted to have a war against Special Service, Freidkam said there's no way they were able to defeat Special Service as the Royal Guard's forces are too weak to fight against them. Soon, Robert claims Freidkam and Yi Yan Xialou are cowards due to being fear at Special Service, which angered them. When Alexandrov explain how wrong the creation of Althea was, Charles orders Three Grand Generals to leave as she wanted to punish him.

After Charles has killed by Nikola, Alexandrov called the Three Grand Generals to finds the murderer who killed her. Soon, Robert "kills" other two grand generals and betrayed Alexandrov. Despite both Freidkam and Xialou were stabbed, they were actually still alive and the stabbing were merely an attempt for Robert to gain trust from the Special Service.

After the King's death, Robert sent Freidkam and Xialou into the Abyss and took their Ballots.

Later when Robert was almost killed by the Special Service's Three Grand Generals, he was saved by Freidkam and Xialou who just got their Ballots back from him, which Robert was shocked at their arrival. Xialou stated that if both her and Freidkam knew what Robert actually felt when he wanted some helps, their friendship may won't ended up being broken and none of them would suffering so much pains. When Robert was confused at what does she means by "responsibility", Freidkam is showed to be shocked. Then, he explained that Xialou actually loves Robert all these time and she has been worrying him ever since they were sent into the Abyss,

in which she was embarrassed and said she will kill Freidkam. Soon, Friedkam told the Specail Service that he won't forgive anyone who tries to hurt Robert and Xialou and that he will kill all of them. Robert's fight against them continues with the helps from his old friends, with Freidkam fight against Eterno while Xialou against Luine and Robert against Sumeragi. As they were fighting, Robert imagines about how Freidkam and Xialou would acts when they discovered Jail Murdoch defeated him earlier and how they wanted to punish him for that, while laughing and drinking alcohols together in a bar.

Freidkam's count is 156412.[1][2] It's stated by Jail that Freidkam is one of the strongest Althea soldiers along with Alexandrov and other two grand generals. 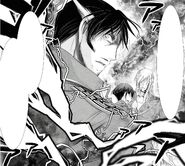 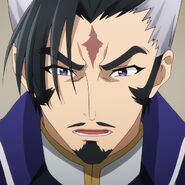