Sumeragi (スメラギ, Sumeragi) is a character introduced in Plunderer. She is one of the White Special Service's Three Grand Generals.

Sumeragi first appeared at Chapter 63, along with other two Grand Generals, Sumeragi arrived at the Abyss. Upon meeting the children from Abyss, Sumeragi asked Eterno that if it's really necessary to bring majority of Special Service's troops here rather than battle against the Althea Royal Guards, Eterno answered with yes as they need a hostage to keep "that guy" who shared the same blood as Licht Bach in control.

When Robert Du Vanvich saved the children from Eterno, he stated that he knew the Special Service would use dirty trick during the war so he waited on the Abyss for their arrival. After Robert told the children to leave, the fight between him and the Three Grand Generals begins. During the fight, Robert attempted to fools his enemies by just revealing his own Ballot, while later brought out the stolen Ballots and uses the elemental attack on the troop. As Robert believes he defeated the Special Service troop, it's revealed that Sumeragi were unaffected by his attack earlier while she told him to use his full powers. Robert tried to use water and lightning attack on Sumeragi but it still doesn't work on her. As Robert were confused, Sumeragi explains that she was born with special ability, which is the ability to immune to all powers, and because of this her count based from how she believes she is the strongest human ever exists in this world. As Robert tries to blow Sumeragi away with his wind power, Sumeragi were disappointed at his power and believes he don't have any useful anymore, so she let the awoken Eterno and Luine to kill him for her instead.

After hearing how Robert would rather sacrifices himself than retreat, Sumeragi stated that she had changed her mind and said that Robert wasn't soft as she believes to be, so she will kill him by her own hands out of respect for his conviction of protecting the children. As Robert is about to be punched by her, Sumeragi's attack was interrupted by a sudden lightning strike from Freidkam Von Lightning, who just taken his Ballot back from Robert. With the arrival of other two Grand Generals from the Royal Guards, Sumeragi was excited at the battle and wonders which sides is stronger. Soon, Sumeragi having a fist fight against Robert, while Freidkam and Yi Yan Xialou fightt against Eterno and Sumeragi.

Sumeragi's count is 472201, her count stands for the number of times she believes she is the strongest human. 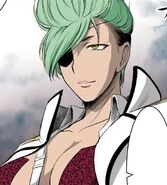 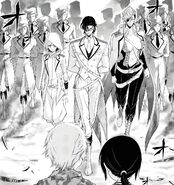 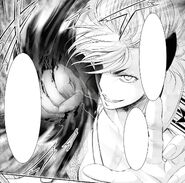 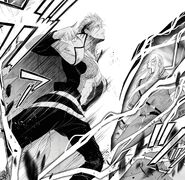