This article is about the original person. For the clone created by Firenda, see Sumiya Asumi (Clone).

Sumiya Asumi[1][2] (住谷愛純, Sumiya Asumi) is a character introduced in Plunderer manga series. She is one of the 13th Special Military Forces School's Class A trainee soldier.

Asumi was encouraged by Schmelman to learn how to use bow. 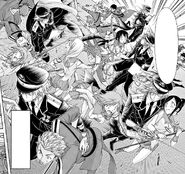 Class A student's anime designs
Add a photo to this gallery

Retrieved from "https://plunderer.fandom.com/wiki/Sumiya_Asumi?oldid=8130"
Community content is available under CC-BY-SA unless otherwise noted.