In the anime adaptation, she seems to have blue hair that is swept on the right side and purple eyes.

Tsukina is a childhood friend of Licht Bach and Sakai Tokikaze.[1] According to Tokikaze, 300 years ago, a pregnant Tsukina had tried to stop Licht's berserk state and the fight between the Sakai brothers. However, Tsukina failed to do so and received a fatal wound from Licht.[2] Though, Tsukina's body was recovered and her brain was kept alive for 300 years until they were able to resuscitate her. Once Tsukina was revived she stole one of the Special Service's Ballots and ran away.

Tsukina first appeared in the beginning of Chapter 1 as she is absorbed into the Abyss. Before Tsukina is taken, she requested from Hina to find a Legendary Red Baron of her choosing and live together with him. Tsukina also gives Hina a Ballot before she is taken into the Abyss. It was later revealed by Licht that Firenda was the cause of Tsukina's count reduced to zero and died, so that she could set up Hina's meeting with Licht and the conflicts between them and the Special Service in the future[3].

Although Tsukina is already death by the time Licht and his group was "invited" by Special Service, when Hina investigating the main base Maskiert Stadt, she discovered Tsukina's laboratory and she tried to enter it. As Hina entered the laboratory, a hologram of pregnant Tsukina appeared in front of Hina which is said to be recorded not long before she was "killed" by Licht 300 years ago. Tsukina told Hina to not give the new drugs she created to any of the Special Service's members. Tsukina explains that she created this drug in attempt to solve the lack of resources issues the Earth had, if the humanity ate the drug they would no longer died from salvation and the resources issues would be solved. However, this drug also can give anyone some supernatural powers that could even surpasses the original seven Red Barons. Tsukina also said that she noticed Firenda was oddly interested at creating this new drug while working together with her. Due to being fear that Firenda might intend to use the drug for her secret plans, Tsukina decided to lock her laboratory under the Ballot's power so nobody but her and Hina were allowed to enter the lab.

As Hina wondering how comes the Special Service already obtained those drugs before her, Tsukina said that if by the time she entered the lab and she already knew about the drugs, it means that someone at Special Service has the ability to transforms themselves into different person, and that person must have transformed into Hina once before to get those drugs earlier. Because of Tsukina's words, it leads Hina to realizing Nikola must be a traitor among Herz Vaalheit's group, and later discovering his true identity being Firenda in disguise. 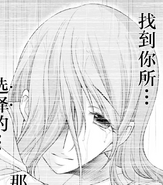 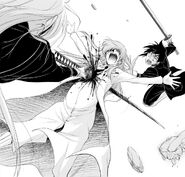 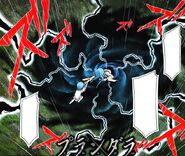 Tsukina reaching out to Hina

Tsukina reaching out to Hina